Camden Town. Playground of the eager tourist and the desperate Londoner. Where the streets are paved with pavement. The land of goths, dreadful Irish bars, and that infuriating guy who sits by the bridge, hawking the plastic yolks you put in your mouth to make bird noises. Where better then to house the nation's flagship museum of history's most persecuted religion?

From the word go, I was bowled over by how kind everyone was at The Jewish Museum: the cloakroom lady, security guard, the man behind the till. I felt like a nephew who'd been away and "never calls and never writes". Ok, I'll stop stereotyping. After this: entrance isn't free. There. It's over. The fee's not a problem though, as the museum's a registered charity and I shouldn't laugh because a Yorkshireman poking fun at spurious claims of Jewish thriftiness has a distinct glass houses/stones smell about it.

The quasi-recent refurbishment has left the ground floor very light, clean and inviting with a 13th century Mikveh beautifully illuminated with angled mirrors that, despite me not having a clue what it was, drew me in for a more intimate inspection.

I'll tell you this much: this Museum doesn't fuck around. First item in the first room is an interactive Torah open on the ten commandments that's controlled by an electronic Yad (half back-scratcher, half wiimote) to see you through the "Thou shalt nots".

I'll admit right here, I'm not a religious person. In the words of Bob Odenkirk, "I was raised a Catholic, so of course I'm an athiest". However, I understand religion's place and importance to it's followers and it's exhibits like these that are germane for the pan-cultural understanding of any progressive society.

Being the middle of a weekday, there were myriad school trips lolling and texting around me and it was genuinely encouraging to see the amount of Muslim kids getting into it all. Maybe a Museum of Islam would be the next step? All this notwithstanding, my hippy visions of peace in the Middle East crashed down to earth when I was creeped out by one of the kids saying to his associates in his most drama school voice, "Oh, cool! The coming of age story."

One thing of note is the attention given to you by the guides. I was approached by three lovely people and had in-depth chats about Judaism, Jewish history and even my lack of belief that wasn't disregarded as Darwinist bilge, but respected and discussed.

The exhibits were laconic and clear in their descriptions. Perhaps the most concise and appropriate I've seen outside an art gallery. They explained a lot I'd often wondered about Jewish customs, like what's the little black box the men wear on their heads and arms (a tefillin); what do the specific foods on a seder symbolise; what are the all candles for; and what do gay Jewish people drink -

The centrepiece was an Italian-designed ark in pulchritudinous hard wood (see above). Around which were items used in the synagogue for acts of worship that are to be made as aesthetically pleasing as possible under the decree of the earliest rabbis. A lot was described, mainly in person, about the particulars of the Jewish ceremony and, best of all, I got to try on their clobber:

Historically, we British like to look down on mainland Europe, especially our Teutonic cousins, for their ill-treatment of the Jewish people. Please don't get me wrong, they really were a shower of bastards, but our relationship with the children of David hasn't been a primrose path either with plenty of blood libels, pogroms and holocausts of our very own (if only Richard I even pretended to like the Jews, he could be Richard the Zionheart. Swing and a miss there you anti-semitic Plantagenet monster). The Jewish Museum unflinchingly holds the horrors their people have endured for all to see, but does so without self-pity. The mantra of the gallery seems to echo George Santayana's "Those who ignore history are doomed to repeat it". 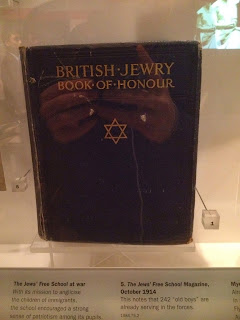 Their history starts with William the Conqueror who brought the first Jews to Britain and continues through the middle ages with the eventual expulsion of the Jews in 1290. There were then secret Jewish ceremonies and the museum explains the plight of Rodrigo Lopez, Elizabeth I's Sephardic doctor, who was eventually executed on trumped-up charges and is believed to be the inspiration of Shylock from The Merchant of Venice. There's some audio by a Shakespearean actor who articulates that Shylock isn't anti-semitic, but about anti-semitism. Quite right (if you ignore the final act's "ding-dong the Jew is dead" routine).

Audio's just the tip of the interactive iceberg. There are computers, games, visuals, quizzes and what's more, they're all worth it. One of the games was about immigration. They gave you some vile quote from a red-top rag, and you had to guess the diaspora, era and publication that were revealed under the flap on which the quote was written. I really think they could make this into a board game.

After the Jewish people's experiences with Cromwell, the Regency, and the Victorians, comes the twentieth century, where the wind really starts to change. The text on Jewish servicemen in the First World War was fascinating and dignified as was the following report on the Zionist movement. Their account of the Battle of Cable Street and the Spanish Civil war were dealt with a deft grace that left me interested to learn more in my own time.

Their board detailing the foundation of Israel was surprisingly neutral. I wouldn't go as far as to say it was non-partisan, but the designers of the museum seemed to stick to their guns without using them. 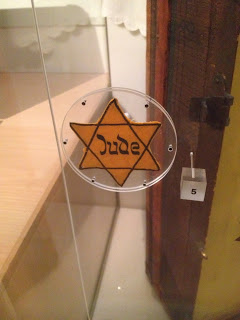 Then came what we all expect, dread, and are fascinated by: the Second World War. A touching account of the Kindertransport that brought a lot of Jewish kids to this country was told through talking heads of those who'd experienced it. The subsequent holocaust gallery detailed things rather differently from the usual: this was the story of one man, Leon Greenman and his experience in six different camps, including Auschwitz. He lost his wife and son to the Shoah and spent the rest of his life campaigning against fascism, visiting schools to tell his story and doing all he can to see it never happens again. Such a display of strength and composure was deeply moving. I don't want to say too much as you should see it for yourselves. Their focus on one person's story broke the overwhelming statistical nature of genocide and just fucking destroyed me. There's also a noble mention to the other groups (disabled people, gypsies and homosexuals) who suffered at the hands of the Final Solution.

"I don't think there's anything wrong with telling the truth to people. We all have a right to a peaceful world."

Ladies and gentlemen, the greatest pun in the history of British museums. If you tickle us, do we not laugh? Not half!

The show itself was OK, I was sad I missed the recent Winehouse exhibition, to be honest. There was an interesting clip regarding Spurs fans' use of the word "Yid", and also a noteworthy piece on Bert Trautman, the Nazi goalie, but apart from that, it was a little dry.

They asked if football was a sport or religion.

If I have one criticism, it's that there's little attention paid to Jewish music. That unsettling Freygish scale that gets in your blood. Where was that? I'm not asking for an old man to play his violin on the roof but some nod wouldn't have gone amiss.
Saying that, not everything the Jewish people have done to display their rich cultural heritage has been a complete success. Exhibit A.


Paul Celan famously said that there can be no poetry after Auschwitz. Well Mr. Celan, I think the Jewish Museum may beg to differ. Everything fits and, what's more, everything they try to achieve, is achieved. It has a dusting of Jewish magic and I implore you to go.